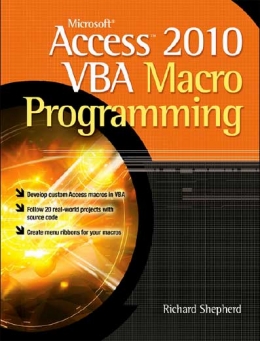 Database macro programming has changed enormously over the last 15 years, having gone from Access Basic macros to VBA. Another major change occurred with Office 95, when macros went to VBA modules in a separate environment accessed via the Visual Basic Editor. It used to be fairly basic: code was entered into a special design window. Although the language was rather powerful in its own right, it was not a structured language and could certainly not be described as object-oriented. The number of commands was limited, and a fair amount of ingenuity was required to do certain tasks. The main advantage was that it was fairly easy to learn and understand; many programmers cut their teeth by initially writing database macros. ចែក​រំលែក​ដោយ ៖ http://penhchet.wordpress.com
Download Link 1
Free Subscription
ស្រាវ​ជ្រាវតាម​ប្រភេទ​​ឯកសារ​